Uju Anya is a professor of applied linguistics and a researcher at Carnegie Mellon University whose critical discourse studies primarily examine race, gender, sexual, and social class identities in new Language learning through the experiences of African American students.

Professor Uju Anya was born on August 4, 1976, to a Nigerian dad and a Trinidadian woman. Uju is an indigene of Enugu state. Uju is also famous for her support of the LGBTQ community. She has publicly declared she is a lesbian after her divorce from her husband

Uju started as a Teaching fellow with the Phillips Academy Andover in 1998, where she teaches introductory, intermediate-level high school immersion Spanish classes.

In 2001, she became a visiting lecturer in the Portuguese Language at the Dartmouth College Department of Spanish and Portuguese. Uju coordinated the Portuguese program’s curriculum and pedagogy in this capacity, including cutting-edge multimedia resources, inquiry, social emphasis, and critical language studies emphasis on Afro-Brazilian culture.

Uju joined the Rassias Center for World Languages and Cultures as a Master Teacher in 2003. She taught and designed English Language immersion courses for executives in Tokyo, Japan, and Portuguese Language for U.S. executives in Brazil. 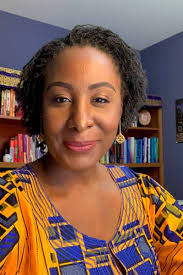 She then worked with the UCLA Department of Applied Linguistics as a Lecturer, Applied

Linguistics & Teaching English as a Second Language (TESL). In that capacity, Uju taught graduate and undergraduate applied linguistics, TESL, and service-learning in TESL courses, as well as academic writing and research skills.

In another capacity, Uju was appointed as an assistant professor of clinical education at the College of Education at Pennsylvania State University.

In 2016, Uju was appointed as an Assistant Professor of Second Language Learning, Department of Curriculum & Instruction Research Affiliate, Center for the Study of Higher Education at The College of Education at Pennsylvania State University.

She is currently a Professor of Second Language Acquisition at the Department of Modern Languages Associate at Carnegie Mellon University.

Uju was married before her divorce. She had two children with her former lover.

Uju announced her divorce via a Twitter post, stating that she and her spouse have just finalized their divorce paperwork. She also indicated that she is free and has no plans to wed.