by Onye Victor
in Politics 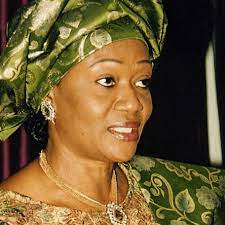 Oluremi Tinubu (born on September 21st, 1960.) is an academician, pastor, philanthropist, and politician.

She is a member of the All Progressives Congress (APC), serving as the incumbent Senator representing Lagos Central Senatorial District at the Nigerian National Assembly and formerly served as the first lady of Lagos State from 1999 to 2007.

She is 62 years old currently.

Oluremi Tinubu is also an ordained pastor of the Redeemed Christian Church of God.

Oluremi attended Our Lady of the Apostles College for her secondary education before proceeding to Adeyemi College of Education, Ondo, to obtain a National Certificate in Education (NCE).

She then headed to the University of Ife, now Obafemi Awolowo University, Ife, to acquire a degree in Biology Education.

Oluremi started as a high school teacher before venturing fully into politics.

When her husband, Senator Bola Ahmed Tinubu, was the governor of Lagos state between 1999 to 2007, Oluremi was the first lady. She held the office with astute charisma and initiated life-touching programs, especially for children and women. One is the New Era Foundation, which is responsible for the “all-round development of young ones and promotes public awareness of environmental health and community service.”

She was elected into the National assembly in 2011 in a controversial election challenged at the Legislative House Election Petition Tribunal. She got cleared and the election was upheld in 2012.

She has since established herself as one of the most charismatic senators in the national assembly.

Oluremi sits as one of the few women on the floor of the distinguished senate of the Federal Republic of Nigeria.

She currently serves as a third-timer in the senate.

Oluremi is an advocate for the creation of state police to tackle insecurity in the country.

In 2021, Oluremi proposed a bill to revitalise the Nigerian Postal Service (NIPOST) to revive its viability.

She is married to the former Governor of Lagos State and the presidential candidate of the All Progressive Congress(APC) for the 2023 general election, Senator Bola Tinubu.

Their marriage is blessed with three children.