by Onye Victor
in Crime & Scandal

John Lyon is a multi-millionaire kidnapper, who was arrested by security operatives on Saturday, September 24, 2022. He was born December, 22, 1986. He is currently 36 years old.

John Lyon is an Abuja big boy, and Sinzu spender, whose wealth was garnered from kidnapping activities. He has an elder brother, David Lyon who almost became governor of Bayelsa State in 2019. 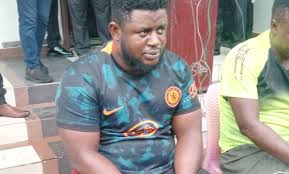 John Lyon has an Elder brother named ‘David Lyon’, who contested for the 2019 Bayelsa Governorship election. The All Progressives Congress (APC) previously ran David Lyon for governor of Bayelsa in the 2019 gubernatorial election.

He was named the election’s victor, but the Supreme Court declared his election unlawful a day before he was to be sworn in as governor, finding that his running mate, Degi Eremienyo Wangagra, submitted a forged certificate to INEC.

The top court mandated that the PDP candidate for governor, Douye Diri, who finished second in the poll, be given a certificate of return and sworn into office.

John Lyon was well-known for displaying large sums of money on social media, advising his fans to “hustle,” and inspiring young Nigerians by speaking about the value of hard work.

Additionally, he shared photos of himself at APC events wearing police uniforms as bodyguards and at church services where he can be seen singing and praising God.

In addition, he used an interior design company in Abuja as his main source of income while giving millions to actors and singers. He spends money lavishly in clubs and bars.

After John Iyon, also known as IK- Kpai- Kpai, was apprehended in Abuja on Saturday after being tracked from Bayelsa state, the footage of the suspected kidnapper went viral.

Iyon was seen begging with other men and crying, “My Wife Just Had A Baby,” in the viral video. As one of the guys said he was a member of the group that kidnapped him, he was also questioned despite his assertion that he had only been engaged in the kidnapping of two persons.

But when he was located and apprehended by a top-notch police team in Abuja on Saturday, it was believed that his cover had been blown.

Following his arrest, David Lyon was shown in viral videos kneeling on the ground, wailing uncontrollably, and pleading for mercy while wearing only his boxers and being handcuffed. He said that his Wife had just given birth to a kid.

He admitted to being a kidnapper while being questioned, but claimed to have only taken two persons.

David Lyon denied kidnapping more than two individuals, but a man on the video who identified himself as one of his victims disagreed with him and asserted that he had.

The man continued by telling how David Lyons’ group had kidnapped him and demanded a sizable sum in exchange for their release. In a recent kidnapping of one Danjuma, a bank employee, he and his guys were successful in demanding over 50 million naira and have since admitted to the act.

John Lyon is a multi-millionaire kidnapper, whose net worth is estimated at $300,000 dollar.