This page contain Asari Dokubo profile, Biography, Age and all that you need to know about Asari Dokubo’s Family.

He is well-known for his anti-government attitude, which has made him popular among Niger Delta residents.

Some locals also regard Dikubo as a folk hero. 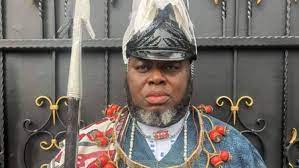 After his elementary and secondary education, Asari opted to get a degree in Law from the University of Calabar before dropping out when he fell out with the school authority.

He then headed to the Rivers State University of Science and Technology. Similarly, Asari dropped out for the same reason.

After dropping out of school, Asari decided to join partisan politics leading him to contest for office on two unsuccessful trials in 1992 and 1998, respectively.

He then opted for activism, where he and some others founded the Ijaw Youth Council(IYC) in 1998 to advance the interests of the Niger Delta’s Ijaw ethnic community.

Asari was appointed as the pioneer vice president of the organization. The council’s primary goal is to underline long-standing Ijaw concerns about losing sovereignty over their homeland and their own lives to the Nigerian government and adjacent oil companies.

In 2001, he was elected president of the IYC and led the organization in pursuing an agenda of “Resource Control and Self-Determination by Any Means Necessary.”

The International Youth Council then launched ‘Operation Climate Change,’ in 1998 to campaign and fight peacefully for freedom, self-determination, and ecological justice.

The Nigerian government reacted swiftly by launching a crackdown on the organization.

In 2004, Asari established the Niger Delta People’s Volunteer Force (NDPVF), which became a major source of conflict in the Delta region. The NDPVF, a militant organisation, was largely supported by local and regional politicians eager to profit handsomely from the region’s oil riches.

The organization was also involved in illicit oil bunkering and other local resource extraction.

Asari was charged in 2005 with treason during the Obasanjo government, but the charges were later dropped to promote reconciliation which led to being granted amnesty by the late Umaru Musa Yaradua.

Asari Dokubo is married to Boma Dokubo and has four children

Asari’s net worth is estimated at N622.5 million ($1.5m). He is one of the rich and famous political figures in Nigeria